“You can’t expect a child to live in the modern world during the week and then take him into a musty, old cob-webbed church like I remember on Sunday.”

This is not a complete list, but rather a starting point for exploring the diversity of Mid-Century Modern worship spaces in DeKalb County. The following churches represent national architectural trends, religious schisms, progressive social changes, and reactions to desegregation. We know the names of some of the architects who drew on modern aesthetics for their designs, such as Belvedere United Methodist Church (now Spirit and Truth Sanctuary). Some congregations fled integrating neighborhoods, leaving behind traditional sanctuaries for modern designs, as in the case of Rainbow Park Baptist Church. And you’ll see that even the smallest of sanctuaries employed modern architectural choices that reflected the period, as in the case of Mt. Tabor Missionary Baptist Church.

What initially set me on the path of this research was remembering some Catholic churches I attended when I was younger. I’ll admit, I noticed more of the design than what was going on at the altar. When I think about Catholic architecture and modernism, Vatican II, or the Second Vatican Council (1962 – 1965), inevitably comes to my mind. Major changes to the Catholic Church ushered in liturgical reform. These changes included reorienting the altar so the priest would face the congregation, no longer requiring head coverings, and allowing mass to be given in the native language instead of Latin. The congregants would be “full and active participants” in the mass. One example, Sts. Peter and Paul Catholic Church, cited Vatical II to revamp from a traditional interior to “Theater in the Round” in 1975. However, in compiling this list, many of these churches would have been under construction or completed by the time Vatican II concluded in 1965. The dark, dusty, and cold stone of churches past was already being abandoned in favor of abundant daylight, natural materials, and streamlined elevations. Churches were still being designed in traditional styles around DeKalb County, but it became more and more common to see congregations choose modern designs for their house of worship. Sanctuary style could even vary out of a single “mother church.” Take the First Baptist Church of Decatur (1951) for example. “Daughter” churches that formed from that congregation included the traditional Columbia Drive Baptist, 1956 (now the Friends School of Atlanta), but also the modern Clairmont Hills Baptist, 1955 (now Decatur City Church). Consciously or not, many of these congregants fled to the suburbs during what we now call White Flight. White families abandoned older intown bungalow neighborhoods such as Kirkwood, and Oakhurst, for modern ranch and split-level homes in new sprawling suburbs in areas like Stone Mountain, and North Druid Hills. The churches reflected the change as congregations left behind traditional facades for modern spires. Today, many of these congregations have either dissolved or retreated further into the suburbs. The physical buildings left behind have reopened with predominantly Black congregations.

A post-war emphasis on religion, family, and community led to a boom of neighborhood churches. Open any newspaper from the time and the pages were filled with advertisements for Sunday worship. In some cases, the neighborhood church and community were the selling feature, and houses of worship included social hours, extracurriculars, crying rooms, and education. The modern church was designed for hip, young, and growing families.

Larger social and spiritual trends of the 1960s were trickling into congregations and designs. Nature, natural light, and “Church in the Round” were no doubt influenced by Eastern thoughts permeating the mainstream. Beginning in 1951 and continuing to the present, the architectural firm of Barker and Cunningham (now Barker Cunningham Barrington, Architects) has been prolific throughout Georgia, and influential in modern church design. Jim Barker summed up the trend in 1961, “You can’t expect a child to live in the modern world during the week and then take him into a musty, old cob-webbed church like I remember on Sunday.” 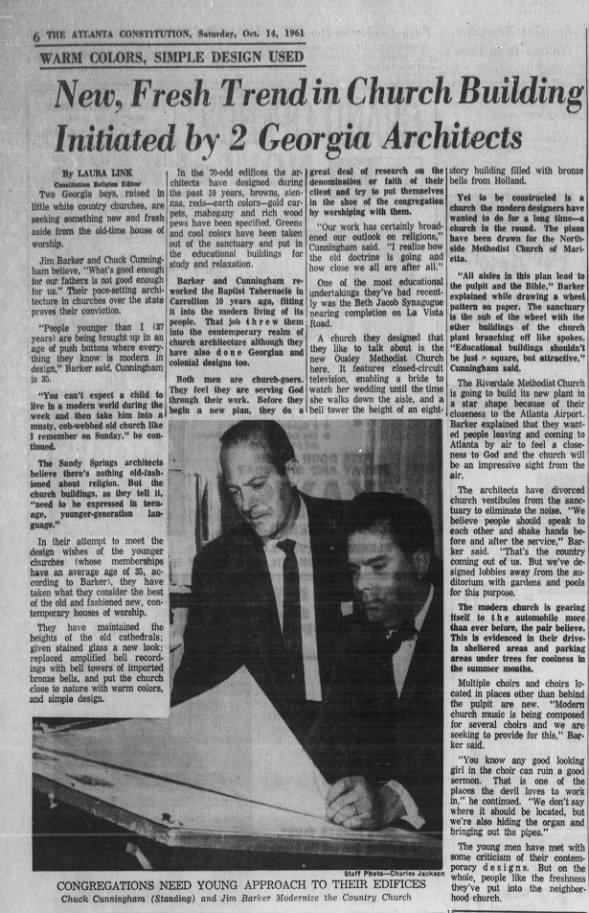 The Catholic Church was not the only denomination modernizing and reforming. In 1968, the Episcopal Church was also experimenting with a new liturgy. A poll of members at the Cathedral of St Philip in Atlanta found “some good points, but they generally showed a desire to return to the more familiar liturgy.” Changes to the liturgy included “giving of the peace” and the prayer of intercession.

1968 was an apex year in a period of revolution: The Prague Spring and communism, Tet Offensive in Vietnam, the rise of the Black Power Movement, student protests around the world, assignation of Martin Luther King JR, and NASA’s Apollo Missions. Amid these secular events, other religious revolutions were concurrently happening. The Cantonsville Nine protest, where nine Catholic priests burned Vietnam draft documents. The creation of the United Methodist Church and Pope John Paul II’s publication of Humanae vitae (of Human Life).

Despite the best efforts of forward thinking architectural firms, church design ultimately came down to money and what the congregation could afford. Large sheets of stained glass, intricate structural work, and curved woodworking all cost money. With the congregation ultimately in charge of design, the final design might end up watered down, which also satisfied the older congregants. If advertisements were any indication, Sunday morning’s sermon was still the ultimate driving force bringing people to worship, not the sleek exterior. 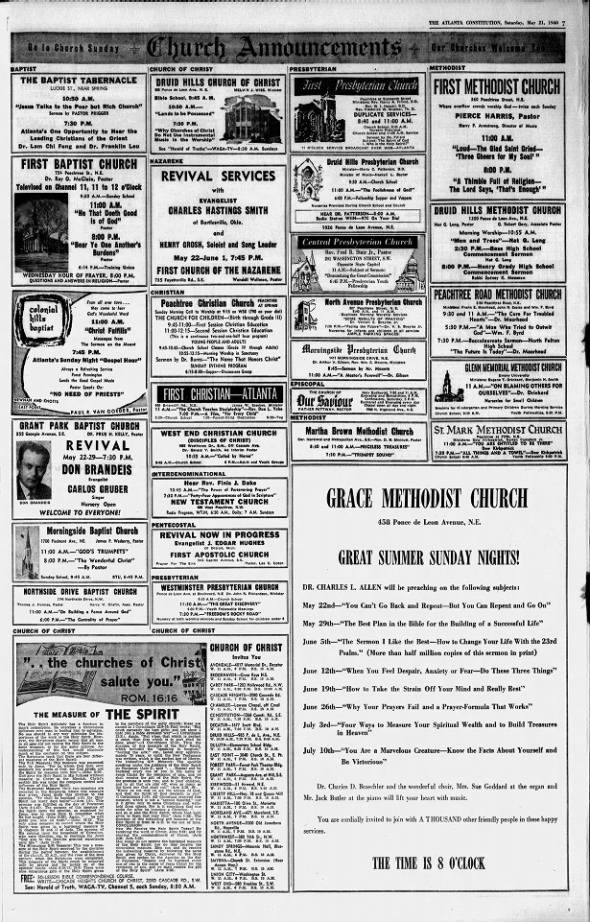 Moving into the 1980s, many of these congregations saw dwindling numbers due to demographic shifts in the neighborhoods and the rise of megachurches. The architecture of these new churches ranges from “postmodern gothic revival” to 10,000 seat stadiums that reverted back to traditional designs. Easier transportation meant churches could be a destination and congregants left behind the small neighborhood churches they once frequented.

The modern churches on this list were built from the 1950s to the 1970s and display some common architectural themes.

A-frame roof line. This emphasizes the nave and therefore the congregation. This roof design still allowed the interior to have volume and height, but its uncomplicated construction cost less than a traditional sanctuary.

Church in the round. In some cases this is a traditional exterior design (Greek Byzantine) but was also used to emphasize the congregation, which was a very modern idea. Some postmodern architects and priests now deride this concept and link it to Paganism and “New Age” beliefs. In many cases the interior seating orientation remains traditional (facing one direction) while the exterior appears round.

Windows. Window styles varied widely. Some churches featured huge sweeping windows that showed off nature or brought in light, while others used hidden and minimized windows that directed the congregants’ focus to the altar. Some congregations still purchased very modern representational stained glass, but others used abstract patterns or varying colors of single panes of glass to enhance their modern design. St Timothy United Methodist Church, 1968.
Congregation originally founded as Kirkwood Methodist, in Kirkwood Atlanta.
Moved to Stone Mountain in 1968.
The stained glass motif is repeated at the front entrance. The overhang is impressive and use of mixed materials. Exaggerated roof and ribbing evoke the belly of a whale. The only windows at the narthex (entrance) and apse (rear) resemble a whale’s mouth. The lack of windows along the naive could symbolize Jonah in the darkness of the belly of the whale. From above, the asymmetrical roof line resembles traditional gothic cathedral architecture with the location of the steeple above the (missing) transept. It is unknown if the color is original.