1st Infantry Flag: This American Flag was flown above Di An Base in Vietnam and the DeKalb County Courthouse.

“The things that the flag stands for were created by the experiences of a great people. Everything that it stands for was written by their lives. The flag is the embodiment, not of sentiment, but of history.” — Woodrow Wilson

The American Flag encompasses a variety of meanings: patriotism, liberty, sacrifice, and courage. The flag symbolically represents American values internationally and serves as a source of pride and reassurance to many citizens. Today, June 14, 2018, marks Flag Day. This commemorates the adoption of the first American Flag by the Continental Congress in 1777, over two hundred and forty-one years ago.

Periodically, throughout the next several months, the DeKalb History Center will highlight certain key selections from the museum collection. We thought it appropriate, to celebrate this holiday, to begin with a historic American flag. 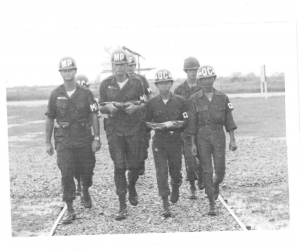 The flag, pictured above, flew above Di An Miltary Base in Vietnam from December 20, 1965, to June 12, 1966, when it was removed by the First Infantry Division. Within seventy-two hours, the flag was delivered to Decatur via Army Jet, was “somewhat stained from its service in the tropics, [and] was still damp after its long trip.” Sergeant John L. Rackley served as a representative of the First Infantry Divison and presented the flag. The flag was flown over the new DeKalb County Courthouse on June 16, 1966, when the cornerstone of the building was laid. 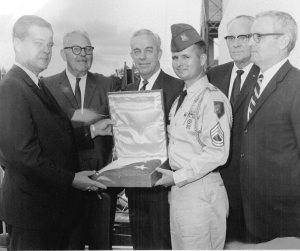 The First Infantry Division is the oldest continually serving division in the regular army. They were one of two initial troop deployments to Vietnam in July 1965. The division headquarters were located at Di An, fifteen miles from Saigon. The division was active in Vietnam between 1965 and 1970 and participated in a number of important operations and battles.

William E DePuy, the commanding major general, wrote a letter to DeKalb County Commissioners noting his “distinct pleasure and unusual honour” to have the flag of the First Division Infantry flown. DePuy was reflective, echoing a sentiment that we feel in the present as we celebrate Flag Day. He noted that the flag had “seen victory after victory… yet the battles… have taken their toll. Many fine, young American men have given their lives for the privilege that you will exercise when this Old Glory is raised over Georgia.”

The US Army. “The History of the 1st Infantry Division.”