A Tale of Two Fires 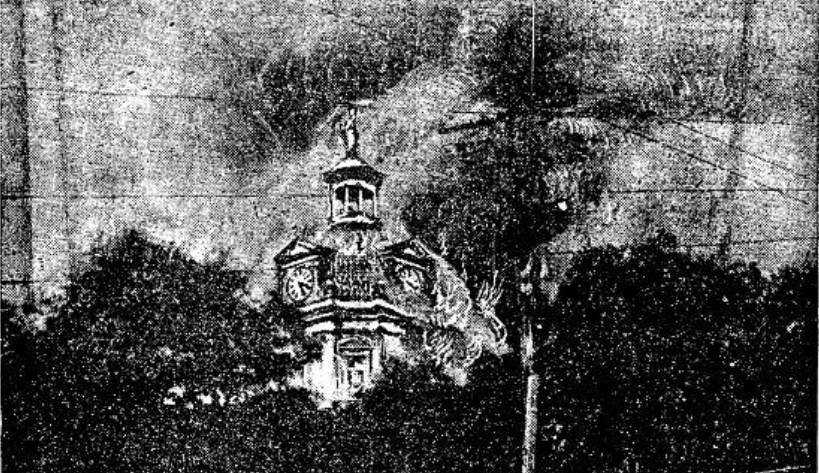 The fourth courthouse (1898-1916) caught fire on September 14, 1916 during the early hours of the morning (Courtesy of the Atlanta Journal-Constitution)

“When knowledge is scant or conflicting, folklore takes over.” – Paul Smith

The stories that we tell, as a society, are a kind of collective imagining, a method to interpret and understand the world that we live in. Folklore serves a way to fill in crucial knowledge gaps, and aides in explaining the inexplicable. Such was the case in DeKalb County where the courthouse has undergone six iterations. Two separate versions of the courthouse burned under mysterious circumstances, and interesting tales have, in the past century, have sprung up to decipher the cause(s) of the fire. These folktales are well-worn, passed down from one generation to the next, and continue to have resonance in the present. Even as recent as 2016, the Atlanta Journal-Constitution repeated these myths when discussing the two fires. This causes one to wonder: do these folk-tales have any truth to them?

A replica of the first courthouse building built in 1823.

The DeKalb County Courthouse, despite its currently stately incarnation, began as a modest building. Built in 1823, the courthouse was a crude wooden structure situated on the Northwest corner of the current Court Square. In 1829, a second courthouse, enlarged to keep pace with county growth, was constructed. Sources disagree on whether it was made of wood or brick. Especially in the early days of statehood, courthouses served as the center of community life; therefore, the courthouse had to be no further than a day’s ride from all parts of the county. The courthouse represented the county publicly, and also served to help foster civic pride.

The building burned on January 9, 1842, in the late hours of the evening. The early Decatur historian and businessman, Levi Willard, recalled it clearly: “The roaring of the fire awoke me as I was sleeping in my cottage on the west side of the square. Drawing aside the curtains, I saw volumes of smoke and flames issuing from the upper windows… What is more awfully frightful than the cry fire! fire! in the dead of night, especially in a little village that is without a fire engine? All that could be done was to watch the flying sparks and burning cinders.” Remarkably, J.B Wilson, who lived nearby, was shocked upon seeing the burned courthouse the next morning. He and his family slept soundly, unaware of the fire crackling throughout the night. The 1842 fire destroyed all county records with exception of the most current minute book (spanning from 1836-1843) which a hard-working clerk took home in order to add additional case details.

Popular legends about the cause of the fire quickly spread. In the 1840’s, the courthouse became a popular gathering place after the Tavern, Decatur’s most popular bar, had closed. Ironically, revelers would continue their partying at the courthouse into the early hours of the morning. The problem grew so bad that the DeKalb Grand Jury recommended that the courthouse should be “closely locked during the night [to] prevent… it being made use for a dancing room and for disorderly collections in the night.” Likely, due to this legacy, the fire was attributed to “carelessness of some card players at a late hour in the night, in one of the vacant rooms.” Alternatively, as there were many suits in court, townspeople suggested that a plaintiff might have wanted their record(s) lost. Neither of these two stories, though popularized, has any definitive basis in fact.

It is important to remember that courthouse fires were not uncommon. Many early buildings, due to practical reasons, were wood constructions and used flammable lighting, making conditions ideal for fires. Over sixty-six counties in Georgia have experienced courthouse fires (around 42%) and some counties have even had multiple fires destroy successive courthouses. The fire altered future iterations of the courthouse; brick, granite, and marble were used in an attempt to fire-proof buildings. The third courthouse was made of brick and was demolished in 1898 due to space constraints. As preservationist Dorothy Rodirigue stated, “Fire and population growth have traditionally been the two main enemies of Georgia courthouses.” The fourth courthouse was built in 1898; it had an ornate cupola and a granite exterior. It was the second courthouse destroyed due to a fire. On the early hours of September 13, 1916, flames broke out and the fire was discovered at 5 o’clock. The granite walls held, but all wooden elements (including the windows, cupola, and roof) became ash. The statue of “Justice” that crowned the building crashed down and was never re-installed. Despite the tragedy, the court had learned from the 1842 fire. While current court documents were lost, older records were safely ensconced in a vault. The Atlanta Constitution reported that even in the evening, the documents were inaccessible due to the immense heat radiating off the vault. Popular folktales say that it was three weeks before the vault could be opened.

Right away, rumors began. Prior to the fire, a state election had taken place, and some court documents, lost in the flames, alleged that officials had committed fraud. Many believed that fire was arson, but public opinion was divisive. Thomas C. Mason alleged that he had heard a “dull thud of an explosion” and smelt kerosene, a fire accelerant (this smell may have come from the burning varnish). The County Commissioner R.J Freeman believed that the fire was deliberately set, and initially offered $750. Shortly after, the governor, Nathaniel E. Harris, extended the reward by additional $500 for the conviction of any guilty person(s). Quickly, an investigative panel determined that the fire was accidental, but this verdict didn’t stop stories from spreading. The stories varied: Maybe a cigar was heedlessly tossed a cigarette or cigar among the paper cover floor.  Maybe election officials were trying to cover their tracks. Maybe radical suffragettes set the fire in the lady’s dressing room (or so we joke here at The Dekalb Historical Center). We will never know about the true cause of either of the two fires. We can view the constant speculation as a way of grappling with limited knowledge.

The fifth and final iteration of the historic courthouse. Note the changed roof and square windows.

The county received an insurance payment and used it to rebuild the courthouse in 1917. Life continued. The courthouse stands today as a testament to DeKalb county; it is a place where citizens gather and can reflect on their shared cultural heritage. It is only fitting that, despite no definitive evidence, the stories continue to spread today. Folktales grow out of specific circumstances, and as Teri Windling said: “Stories can help us escape calamity, and heal in the aftermath.” The popularity of the courthouse fire stories shows the importance of stories: we use them to comprehend our own experiences and mythologize our lives.

“Burned Courthouses.” Destruction of Courthouses in Georgia. Accessed May 24, 2018.

“DeKalb Courthouse Destroyed by Blaze: Theory Is Advanced That Fire Was the Result of Incendiaries.” The Atlanta Constitution, September 14, 1916. Accessed May 24, 2018.