The Houston Mill House was built in 1925 by H. J. Carr and is located on Emory’s campus.

Published in Memory of Kathy Kirby Harmer who donated these materials to the DeKalb History Center. The back of the Carr house after snowfall.

The Houston Mill House, located at the edge of Emory University’s campus, was not a mill and was never occupied by the Houston family. Why does it have that name? The history of the property is tied to significant DeKalb families and institutions. And like much of DeKalb County, it has gone through dramatic change. Once a rural homestead, now only a portion of the property remains undeveloped, providing an event space and wooded respite within a busy urban campus.

The original mill structure, known as Houston Mill, was built in 1876 on South Fork Peachtree Creek by W. J. (Washington Jackson, or Wash) Houston. He had purchased 600 acres in the area from his father-in-law, Dr. Chapman Powell in 1842. Houston dammed the creek and used the water power energy he created to grind corn. He continued to use it as a gristmill until 1900, when he converted it into a hydroelectric plant – the county’s first. He was the president of the newly formed Decatur Electric Light, Water, and Power Company which supplied electricity to Decatur and Agnes Scott beginning in 1903. The back of the historic mill. During this time period, mills flourished throughout DeKalb County along its rivers and creeks and were used for a variety of industries from production of lumber to the grinding of corn and grain. The waterpower would turn the large millstone and grind corn into corn meal. Local farmers often brought their corn to the nearest mill for processing. They would opt for corn meal because it was easier to store, more useful in baking and cooking, and was easier to preserve than an intact ear of corn. The mill owner was not paid in money, but took a “toll” or a portion of the product. In the case of corn, the toll was one-eighth of what was produced. This bag was from H. J. Carr’s production years. In 1854, W. J. Houston married Amanda Katherine Powell. During the Civil War, he and his family lived at the Powell homeplace on Clairmont Road. Houston had many different businesses interests throughout his life. He started his career as a bank clerk, and later became the general passenger and transportation agent of the Atlanta & West Point railroad system. After the Civil War, he was appointed to the U. S. Department of the Interior – Indian Affairs, was elected as a Representative to the Georgia Legislature, and finally retired to pursue his interests in milling and raising cattle.

From about 1900 to 1921, the mill was renowned as an event space. Houston’s daughter said her dad would host a party every May. “Everybody from Decatur and miles around would come and bring a picnic dinner. Everybody danced the square dance and the Virginia reel. The mill was a beautiful spot.” Many of the local histories report that the mill pond was the swimming pool for this part of the county and provided excellent fishing. Locals would camp around it and have fish fries.

Henry James (known as H. J. or Harry) Carr was born in Rockingham, North Carolina in 1878. He married Bonnie Tate of Monticello, Kentucky in 1903.

After moving to Atlanta at the turn of the century, Carr began working for his uncle, John Carr, who specialized in the construction of courthouses and jails. In 1909, he formed his own construction business: H. J. Carr & Company General Contractors. Soon rising to prominence in Atlanta and north Georgia, he formed partnerships with many of Atlanta’s most prestigious architects such as Ivey and Crook, G. Lloyd Preacher and Neel Reid. Some of his well-known commissions included Druid Hills High School, Brookwood Station, the Candler Building, the Crum and Forster Building, the Biltmore Hotel and the Briarcliff Hotel and Apartments. The 1927 Crum and Foster Building, 771 Spring St NW, Atlanta, GA. This view shows the entire building – in 2017 the rear two-thirds was demolished by Georgia Tech. Carr’s construction company erected mostly commercial buildings; however, he also built homes for some of his colleagues and neighbors. He was hired by the legendary Atlanta architect, Henry Heintz, to build his residence on Ponce de Leon Avenue. Carr built a home for Asa Candler, Jr., known as Briarcliff. Some of his buildings have been listed on the National Register of Historic Places and serve as tangible examples of his talent and success.

In 1921, H. J. Carr began renting Houston’s property adjacent to South Fork Peachtree Creek. He and Bonnie had been living in Druid Hills but wanted to establish an idyllic estate for their family which now included three children: Harry Jr., Gladys, and Frances (who later married John Kirby). Carr purchased the Houston property in 1922 (much of which had been sold over the previous 46 years). He also put together adjacent parcels from three other owners and by 1929 his estate totaled 61.1 acres. 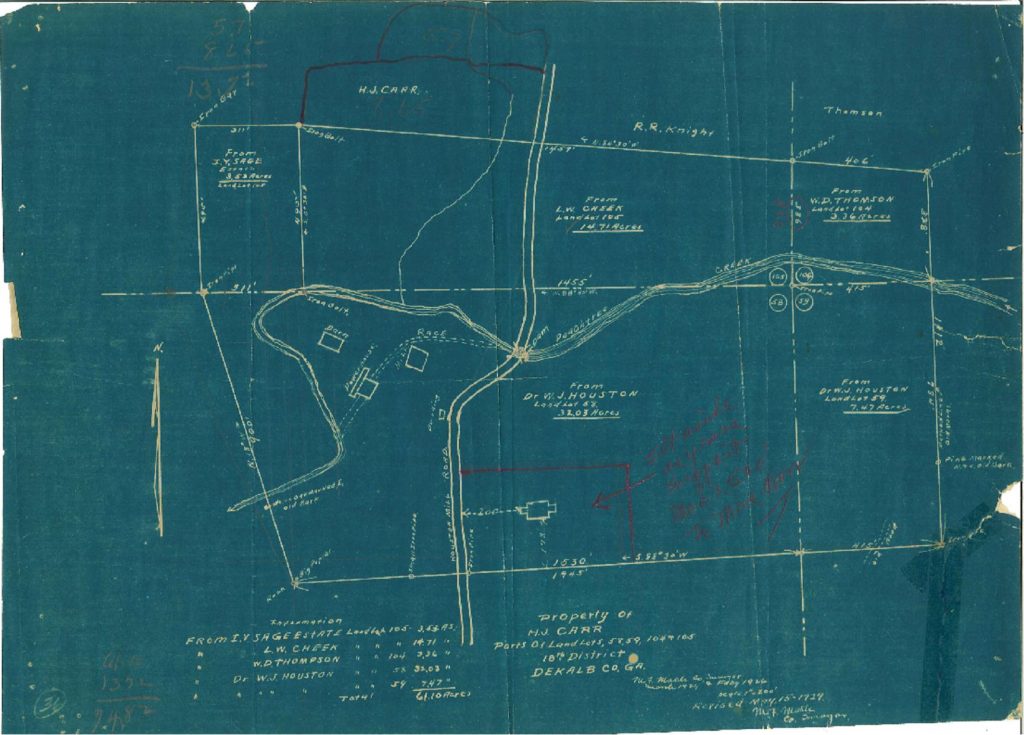 In addition to structures – including the mill race – this 1929 site plan shows the different parcels Carr bought to form his 61 acre estate.

Carr made many improvements to his new estate. He renovated the mill, rebuilt the dam and built two powerhouses using the same fieldstone he used for his home. The family used the mill for social functions. He built a large swimming pool and pool house, added foot bridges, a swinging bridge, extensive sidewalks, and the main house. He also added a springhouse and two water storage tanks. There was still a turn-of the-century cottage (probably for a caretaker) on the property when Carr bought it. After restoring the grist mill, locals could purchase six-pound bags of “slow process, unbolted corn meal” that had been processed there, until 1940. Aerial view of the property which includes the bridge, powerhouse, barn, and mill. Aerial view of the house. H. J. Carr on the bridge he built. One of the powerhouses in action. Carr brought his expertise as a builder to their new home. The vernacular house was clad in fieldstones and featured a slate roof and copper gutters. The house was inventively engineered, with floors of poured concrete. Decorative wrought iron was used for balconies, gates, and stair rails. The exterior is nearly symmetrical with the two-story main block flanked by one story wings. The left wing was a sunroom and the right wing contained the kitchen and pantry. The house also had a basement, seen only from the rear, which included a large billiard room and a three-car garage. It was built with four bedrooms and two bathrooms on the second floor. The main floor had a guest bedroom with a bath and a very large living room. This stately home rises 105 feet above the Peachtree Creek riverbed, and was completed in 1925 for a total of $130,000. Maple was used for all of the interior woodwork and some of the floors were finished with terracotta tiles. The fireplaces in the living room and billiard room were faced with granite. Kathy Harmer, one of the Carr’s grandchildren, remembered that on Christmas Eve, the children would leave their shoes on the hearth instead of hanging stockings – the granite was impenetrable.

Landscaping was also carefully planned – sidewalks and drives curved around the house and estate. The front of the house was adorned with a statue in a small pool, and informal hedges. Terraces were built to slope down from the lawn; this emphasized the position of the house on the hill.

The large swimming pool was located downhill from the house and fed by spring water. The Carr children, who attended Druid Hills High School, spent hours relaxing in the sun with friends, and swimming and diving from three diving boards. There was a barn with their horse, Billy, and several goats, which the children enjoyed feeding.
H. J. Carr retired in 1932, and in the following years, he enjoyed spending his time with his family at their estate. Emory University purchased the property from Mrs. Carr in 1959 (a year after Mr. Carr’s death), but she retained a life estate. She lived in her home until her death in 1976. She had also negotiated to retain use of the pool, but it and the pool house fell into disrepair over the years. There are no notes but this may be Billy. Later view of the pool with a power house on left and newer bath house on right.

The mill was described in 1965 by an Emory employee as “an old two-story yellow building trimmed with fading green shutters and weathered by years of rain and sun.” Over the next year the School of Nursing converted it into a retreat for its students. Emory asked Mrs. Carr if they could demolish the mill in 1973, but this did not actually take place until 1983. Joseph Augustine Sams Bond donated the millstone to the DeKalb History Center in 2001. It is displayed on the northern lawn of the Historic DeKalb Courthouse.

The University did fill the pool with dirt in 1973, with Mrs. Carr’s permission. The caretaker’s cottage was used by Emory during the 1960s, but demolished by the University in 1970. It was also during this time that Emory began using the grounds around the pool, barn and mill as a dump for fill dirt removed from new construction projects on the campus. By 1979, both the mill and the pool house were half covered by the dump and neighbors began to express concern because the fill dirt was in a flood plain.

After Mrs. Carr’s death, the Emory Woman’s Club became interested in restoring the Carr’s home. This group was composed of female faculty, administrators and faculty wives. They moved towards that goal for several years by holding a variety of fundraisers. They also briefly rented it to the Chi Phi Fraternity after a fire rendered their house unlivable. By 1979, the club completed the renovations and opened the house for their use. It was at this time that they gave the structure the name of “Houston Mill House.” It was used by the Woman’s Club at least through the 1980s. Still owned by Emory University, the house itself is an event venue for weddings and other functions, while some of the architectural remnants can be seen at Hahn Woods (the T. Marshall Hahn Commemorative Forest).

These interesting photos provide a great side note: Carr was an active member of the Masons and he frequently hosted the Shiners at his residence. He was a part of Malta Lodge #641 F & AM and the Royal Order of Jesters. The same group of men (from left to right) in different costumes.

All photos are from the Carr Collection in our archives; most are not dated but range from the 1920s – 1960s. A previous version of this article was printed in our newsletter, Times of DeKalb, Summer 2015.