The DeKalb History Center collects, preserves, and shares the wide-ranging stories of the people and places of DeKalb County.

We envision a county connected, enriched, and energized by people who see themselves in the histories we share and who engage with the stories of all the people and places that surround them.

DHC is a membership based non-profit; we rely on contributions from individuals, corporations and foundations who support our mission.

The DeKalb History Center (DHC) was initially established as the “DeKalb Historical Society” in 1947. After a Resolution in 1968 by the DeKalb County Board of Commissioners, we moved our offices into the historic DeKalb County Courthouse and have been located here ever since. During the early 1990s, DHC spent over $1,600,000 renovating the Courthouse. We have a museum and archives on the main floor and welcome visitors and researchers. 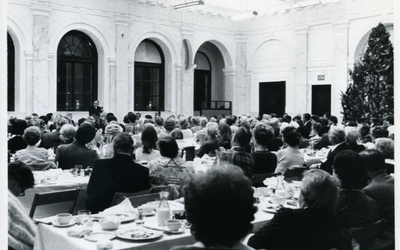