Once upon a midnight dreary, while I pondered, weak and weary,
Over many a quaint and curious volume of forgotten lore—

So begins one of Edgar Allen Poe’s best known poems, “The Raven”.  The style and mood of the poem are notable; they are somber and rhythmic in a singular way.
Or perhaps, not so singular as all that.  Compare “The Raven” to the lines from another poem, by a different poet:
When thy soft round form was lying
On the bed where thou wert sighing,
I could not believe thee dying,
Till thy Angel-soul had fled;
The above stanza is the opening of the poem “To Allegra Florence in Heaven” written by Dr. Thomas Holley Chivers.  The rhyme scheme sounds very familiar, as does the mournful tone.  It’s no wonder then that a plagiarism controversy ended up surrounding these two works.  To this day, there is no real, concrete consensus on who copied whom.  But there is no denying that both poets clearly drew some inspiration from each other.  This is no surprise considering Chivers and Poe were friends.
You might be thinking that you’ve never really heard of Chivers before, while Poe was a regular feature in your literature class.  But it is a fact that Chivers was a poet during the same period, with several published works of his own, and a colorful personality that no doubt made itself known in his writings. 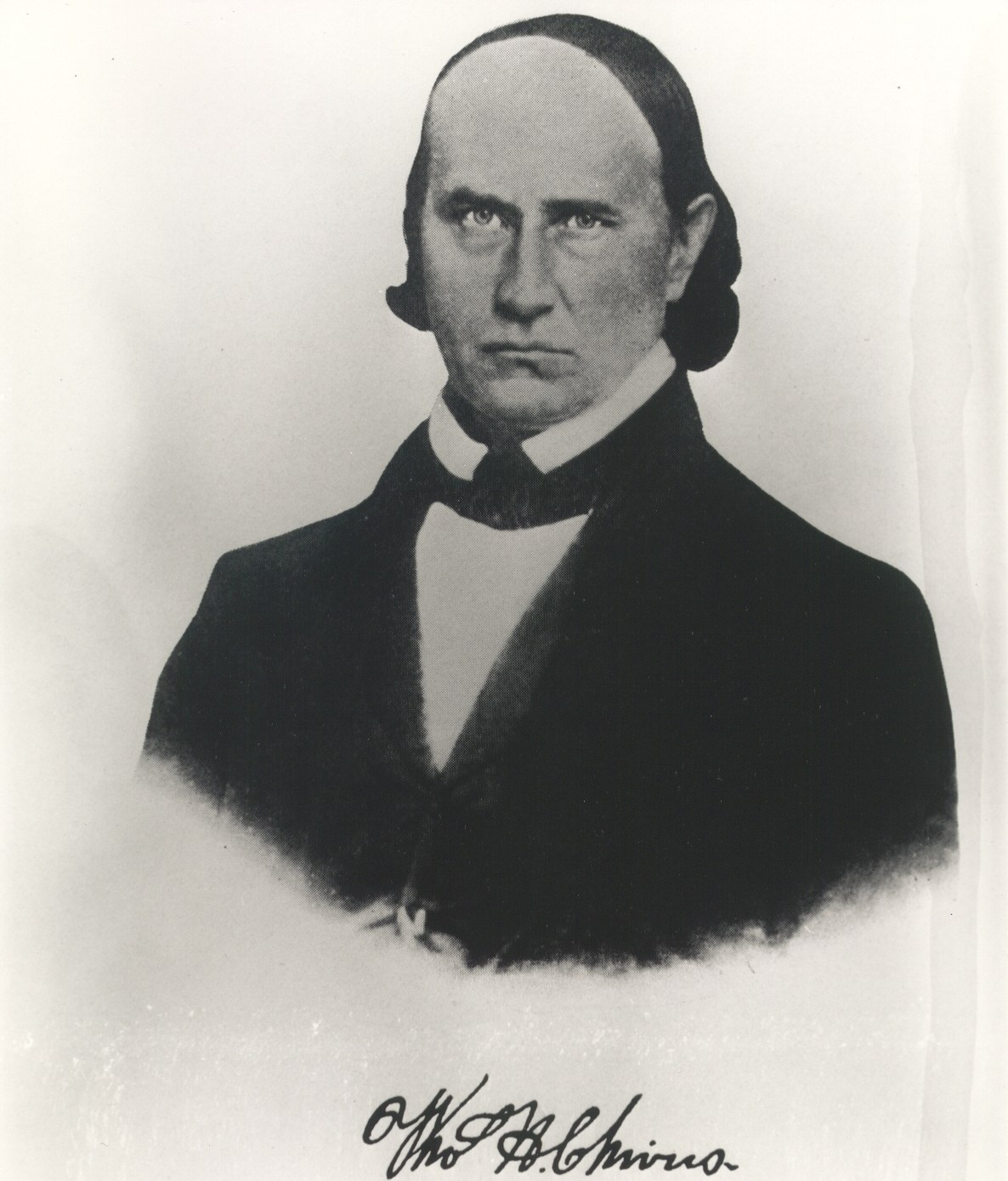 Thomas Holley Chivers was born to Colonel Robert Chivers and “Miss Digby” in October 1809 – just nine months after Poe – in Wilkes County, Georgia.  His sister died while he was a teenager; this death and others contributed to the tone of many of his poems.  In his late teens he – like Poe – married his cousin.  Though, he didn’t stay married for long.  Not more than a year later his wife, pregnant with their daughter, left.  He decided then to leave Georgia and went to Kentucky to study medicine at Transylvania College.
When Chivers graduated two years later, he began practicing medicine, and attempted to reunite with his wife.  She rejected him and so he claimed – considering that he had not allowed a divorce – that he had a legal right to her share of her father’s estate.  Furthermore, he refused child support to his daughter.  This whole affair caused some scandal, and so he left Georgia again.  Given that his father owned a cotton plantation, Chivers didn’t really need to worry about money.  He was free to go where he wished, and write his poetry as he traveled.
It was in 1832 that he published his first volume of poetry, with another following two years later.  By then, he felt ready to head north and mingle with the literati in the big cities along the east coast.  He was a unique character in those social circles, with a strong personality, a Southern slave-holding background, and with a somewhat snobbish character.  He also continued to cause some scandal when it came to women.  In 1837 he married a teenage Massachusettsan, Harriette Hunt.  He was of course, still married to his first wife, and it was only through the help of a loophole and his lawyer that his marriage was legitimized.
In 1841-42, Chivers and Poe had their first real interaction.  In critiquing Chivers’ poetry published in a magazine, Poe claimed him to be “at the same time one of the best and one of the worst poets in America.”  Chivers was upset by the negative parts of the critique and wrote letters to Poe that finally started their correspondence.  After an apology, the two began writing each other.
They shared their work, opinions, and beliefs, holding meaningful conversations and starting a firm friendship.  Chivers expressed worry over Poe, at one point offering up his home for Poe to stay.  When Poe ultimately died in 1849, Chivers wrote a biography on him, standing as a staunch supporter of his work until the 1850s.  This was when the plagiarism scandal began.
With critics praising Poe’s work for its originality, Chivers began to claim that Poe had stolen some of his ideas.  However, Poe was the more well-known of the two, and Chivers had not placed an accusation while he was still alive.  The critics therefore turned and accused Chivers of being the plagiarizer.  No matter how Chivers insisted, he was not believed.  In fact, the more he sought to persuade others, the less he was taken seriously.
And so eventually, he returned to Georgia with his family in 1855, building a home in Decatur.  This home, the Villa Allegra – named after his deceased daughter – was torn down in the 1950s.  The Avery Glen Apartments now stand in its place. Dr. Chivers continued to write his poetry until he died in 1858.  His singular personality followed him even after his death.  He had wanted to be buried underneath his front steps, some supposed it was to keep his wife from remarrying; any and all guests would literally have to step over his dead body.  He was eventually moved to the Decatur cemetery.  His tombstone reads:

“Here lies the remains of

as a lyric poet,

his works will remain a

after this temporary tribute of love

is in dust forgotten.

This soul winged its flight To quote Chivers, he is “There to rest for evermore!”